The maori legends of maui

He watched the flames flicker and dance and thought to himself, "I wonder where fire comes from. We need all the room in our waka for the many fish that we catch. The eldest brother would reply, "You're so skinny we might mistake you for some bait and throw you overboard for the fish to eat. As he wove he recited an old karakia to give his fishing line strength.

Let your lines down as I say my karakia and you'll catch more fish than you ever have. The brothers threw their lines into the water and instantly began catching fish. One after another they pulled their fish into the waka.

In no time the waka was full and the brothers were delighted with their catch. He spun his line out to sea, the line sunk deep to the ocean floor, down into the depths of the domain of Tangaroa, and instantly the hook was taken. The brothers stopped their laughing and held tightly to the side of the waka as they began to speed across the ocean.

The brothers huddled in the waka shivering with fright. The giant fish towered over their small canoe.

As they neared the brothers were seen still chopping and arguing over which part of the fish was theirs. The people saw them for the greedy brothers that they were. They were so greedy that they had chopped huge gullies and mountains from the fish's flesh.

Over many hundreds and thousands of years, these gullies and mountains became part of the landscape of Aotearoa as we know it today.The legends of Raro-Toaga state that Maui's father and mother were the children of Tangaroa (Kanaloa in Hawaiian), the great god worshiped throughout Polynesia.

There were three Maui brothers and one sister, Ina-ika (Ina, the fish). 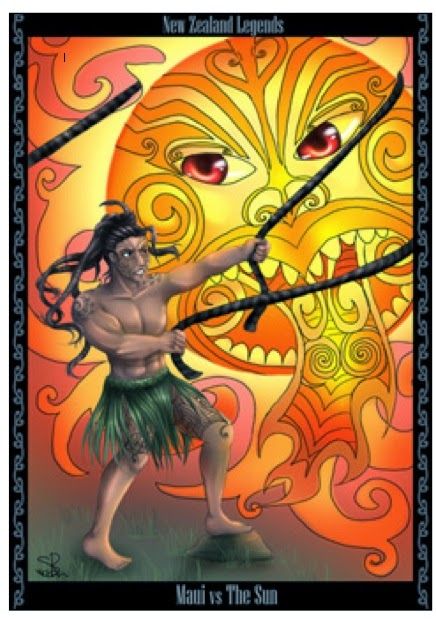 According to Maori history, the North Island of New Zealand is known as Te Ika a Maui – ‘Maui’s fish’.

Maui appears in many Maori and Polynesian legends; he was the clever, gifted demigod of supernatural parents. How Māui slowed the sun. One evening, Māui and his brothers were making a hāngi for their evening meal. They had just finished heating the stones when the sun went down and it quickly became too dark to see.

Māui was annoyed with having to eat his food in the dark. He stood in the light of the fire and addressed his people. According to Maori history, the North Island of New Zealand is known as Te Ika a Maui – ‘Maui’s fish’. Maui appears in many Maori and Polynesian legends; he .

Maui was also the subject of Israel Kamakawiwo'ole's song "Maui Hawaiian Sup'pa Man" in his most well-known album, Facing Future, which is the highest selling Hawaiian album of all time. See also [ edit ]. Maui the Polynesian Demi-God, Legend of the Naupaka Flower, Seeking Immortality on Earth, some of the most interesting ancient Hawaiian Legends of Maui.